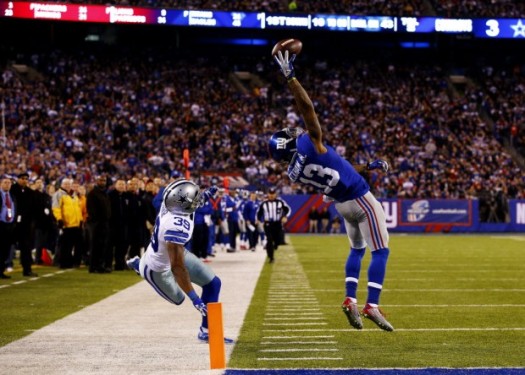 Being an artist helps me appreciate the clarity between success and failure in sports: one person outruns another, out-maneuvers another, out-scores another, and we lucidly know what has been achieved. We see toes miraculously land in bounds, a ball passing wide of its mark, and we understand the intention behind these actions and can judge their outcome.

This transparency and immediacy binds sports to the moment, coupling them with the now in a way which affirms basic life conditions. Sports provide an arena for executing singular actions – individual throws, leaps, spins, and coordinated movements – and a framework for interpreting them. They allow, through known precedent and kinesthetic sympthy, a means for gauging physical actions. [1]

That is why we are able to recognize the athletic moments when human limitations have been if not transcended, then nudged further outward.

On November 23, wide receiver Odell Beckham Jr. contributed to this perpetual nudging. His catch is an act that can be understood outside the specifics of place, circumstance, and game, comprehended through shared fundamentals of human movement. To be a person with a body that moves is to understand something of Beckham Jr.’s catch. It is the kind of feat that redraws the territory of what is known as possible. It is a small chiding of the artificial limits we place on ourselves. It bends physics. It affirms life. It shares the world-expanding qualities of any other successful art.

Beckham Jr.’s catch is not an anomaly, but the fruition of a longstanding exploration of bodily possibility that has occurred offstage. It is an artisan taking their wares to market after months in the workshop. Preparatory activity is the majority of artistic activity. It is often a step into darkness, because if, when, and how it will be tested is unknown. It is a rehearsal for an unknown staging. Preparation requires faith that its time will come. [2]

Devotion to the impractical is high art. Or perhaps it is the reverse, with high art delimiting itself through jettisoning the pragmatic. It is an ingredient at the very least. When an economist asks physicist David Kaplan what we gain from the Large Hadron Collider’s experiments, Kaplan replies, “I have no idea.” [3]  The question should not always be one of cost versus benefit. Such currency lacks jurisdiction here. There are explorers like Columbus, who take to the seas in search of a known commodity that appeals to materialist ideology, and there are explorers like Sarah Sze, who model unknown intangibles of meaning and behavior. [4] Weighed on this scale, Odell Beckham Jr. models intangibles. He executes the unforeseen. He is an artist.

2. Zen teacher John Tarrant: “We do not trust that there will be a happy ending but that this dark moment is itself life and holds its own reasons.” Tarrant, J., The Light Inside the Dark (New York, 1999), 67.